It has been a while since we lost our beloved Oscar Puss and wanted to check in on what is going on in the household.

Archie is a moggie who still sleeps more then awake and still my shadow.  When I work in the office he is always on the desk now sleeping where Oscar used to be in the afternoons.  Archie’s fur has to be regularly brushed as he cannot wash everywhere like before as his flexibility is not what it used to be.  The old boy still loves his food and is now friends with Big Ben.

Big Ben has been with us 4 years in January and will be 11 years old next month.  The time has flown by and I can honestly say that even though he had many challenges in the beginning, with love and time he really feels at home here and safe.  Just wish he was ok with other people and animals, but like the behaviourist said ‘You have one grumpy old boy’.

Henry is now 12 years old and can now in recent weeks be in the same room as Big Ben.  He still meows when not happy, happy, hungry, thirsty, wants attention … you name it.  Still the baby of the house though 🙂

A much quieter house, however Craig and I keep reminding ourselves that Oscar had the best home as he was so spoilt and very much loved.

This Thursday we are in for a big treat and super excited to welcome the first blogger to ever like our blog and become dear friends with since over the blogging world Linda from https://savannahspawtracks.com.  We cannot wait to meet her and I know she is so looking forward to finally meeting Archie, who she has always had a soft spot for.  We will keep you updated on the visit.

In the meantime hope all is well and you are taking good care of each other.  Type soon

As some of you already know, our beloved Oscar passed away suddenly on Friday. 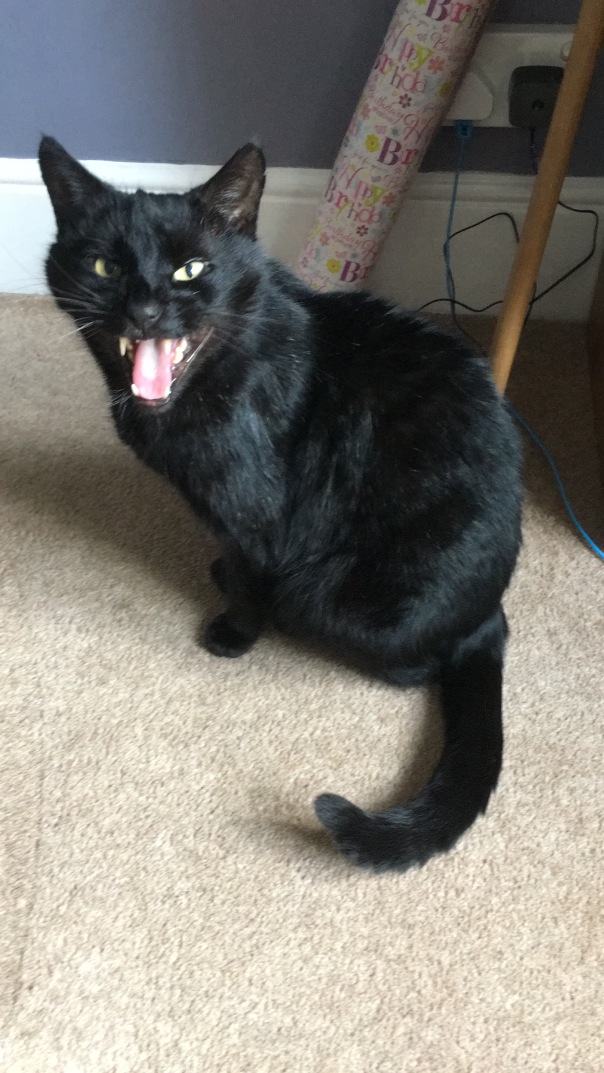 Our noisiest boy has had some issues with his lungs since his darling brother Henry gave him an early present as a kitten – cat flu!

He got through that scare – the vet said he wouldn’t survive – through the power of sardines and late nights for Mum and Dad.

From that moment onwards, the cat who supposedly had problems with his lungs made the most of every bit of them.

Half cat, half bagpipes. Our little boy was the chattiest cat in town.

In his early years he liked to wake us up by “singing” at the window… generally at around 5am.

When we moved house, the addition of a cat (dog!) flap earned us some respite at he would instead wonder in to cuddle up next to his brothers.

He was an excellent mouser. And ‘bird-er’. No creature was safe in the garden when Oscar puss was about.

He was our little soldier, who guarded the house and let no-one else approach without warning: greeting all with a large and loud meow or a fearsome pounce (sometimes both!), depending on whether they were friend or foe.

Oscar loved to patrol. It’s a busy world out there with fences to climb, mice to play with and territory to defend.

He did it all until the very end.

When we first rescued Oscar his given name was Engine Joe.

It didn’t suit him, but came about as he was found sleeping on an engine as a kitten.

We adopted him after he attracted our attention by constantly batting the tail of the cat in a neighbouring cage at the cattery; a somewhat battered looking, half-eared white (with a bit of black) cat who was soon to be named Archie.

Oscar was 12 weeks old approximately . His cage mate, Henry, was even younger – so small he barely filled our hands.

The three of them soon became best friends. Two terrible tiggers and an older, more sensible lion to look over them.

His brothers are so sad now. They miss their chatty play-mate.

Oscar’s talking was legendary. Clearly part Siamese, there were moments we thought he’d never shut up.

He drove Dad crazy. He had conversations with Mum that made War and Peace look short. And when chicken became involved that was a whole new world of MEOW!

Oscar loved his kisses. He loved to be the centre of attention.

He was our friend. Our protector. Our baby.

Many of you who know from the early years that Oscar has trouble every now and then with his breathing as a result of cat flu as a kitten.

well the past 2 to 3 years all has been 100% good until recently when he has had three emergency visits to the vets.  The last visit was yesterday and Craig took him as I felt I was getting no where and was so worried my poor boy was damaging his lungs the longer it went on.  To my surprise Craig called me after and advised that Oscar had a steroid injection and that moving forward he will be on drugs to help prevent his issue going forward.

Today the 11 year old moggie is breathing normally and constantly wanting attention as I work.  Please note Oscar’s attention is constant meowing with bottom placed in my face LOL.

All good in moggie and Big Ben household for now phewwwww

It appears our WordPress is restricted to how much we do unless we upgrade and so hence the few words/ pictures at the present time.

we are all well.  We have had a few health scares with Ben, Archie and Oscar, but at the present time they are good and healthy with the help of right drugs.

We hope you are all well and preparing for Halloween.

Michelle’s mum was distraught on the phone as expected. What happened was he had breakfast then went outside and was poorly, next his back legs went thankfully he was being watched and was rushed to vets straight away. Cause was as he had a heart murmur a blood clot was going around his heart and slowly shutting his body down. There was no option and the whole family is distraught as we cannot believe our lion has gone and so quick. 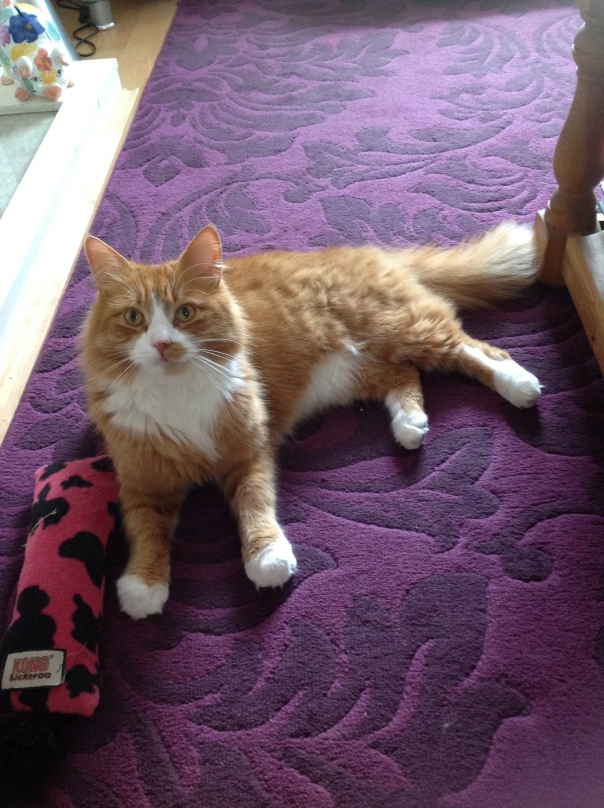 We are grateful he is now with his ginger uncle Sammy (from One Spoiled blog)
and they are rolling around playing and getting to know each other. 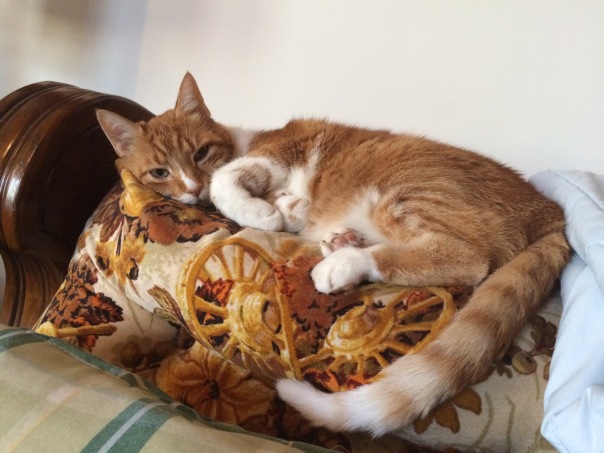 Michelle, obviously in tears after, called the moggies as they are all outside and it was Oscar who ran to her and let her have a big hug. Oscar is very close by lately and very affectionate, which is not like him.

Can you find Henry 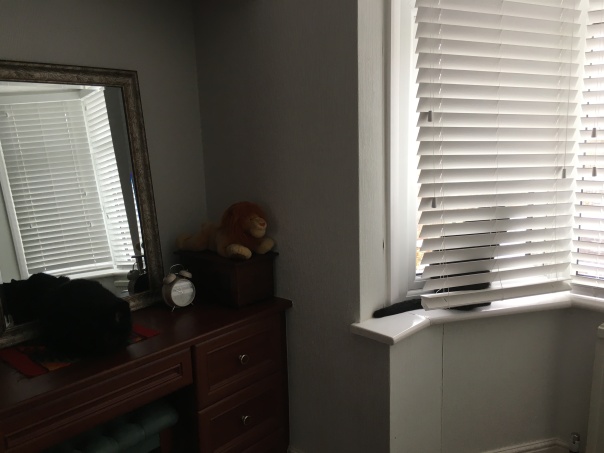 Daily adventures of living with a bunch of cats

a running explorer of this planet

The Lives and Training of Service Cats

Passion is a five letter word : Heart - by Cat Forsley