Oscar knows what he wants and lets you know 🙂 END_OF_DOCUMENT_TOKEN_TO_BE_REPLACED

A purr-fect story… or two

Dad’s been playing on the internet… and he found this incredible story.
We wonder what the customer would’ve made of Archie’s purr!

Customer: “Excuse me. I have a question, and I know these nice ladies are really pushing for these cats to be adopted, so I’m afraid they won’t be honest.”
Me: “Oh, sure. What can I help you with?”
Customer: “This cat… it’s vibrating. Is that supposed to happen?”
Me: “Yeah, it’s purring. That means it’s happy.” 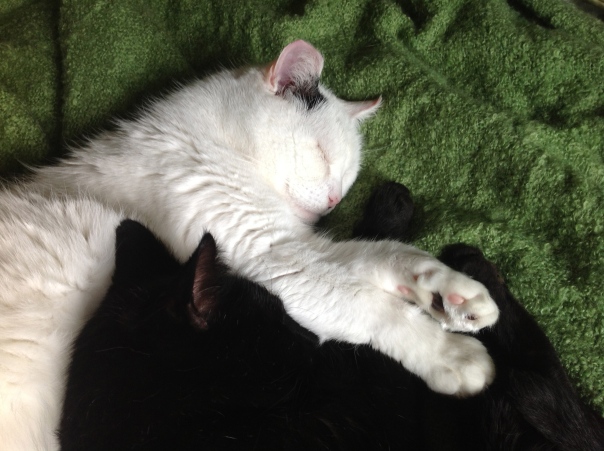 But do you know how the cat got his purr?
Well, once upon a time a King and Queen gave birth to a baby daughter.
But an old witch who read the Queen’s fortune told them a dire story: “You will bear a daughter and she will be strong and healthy.
“However, she will fall dead if she ever gives her hand in marriage to a prince. Heed my advice. Find three pure white cats, with not a single black hair upon them, and let them grow up with your child.
“Give the cats balls of two types to play with – balls of gold and balls of linen thread. If they ignore the gold and play with the linen, all will be well, but should they ignore the linen and choose the gold, beware!”
The King and Queen were so upset they banished the witch, but her warning weighed heavily on them.
The King’s subjects offered him cats of all kinds, from tabbies to tortoiseshells, ginger toms to black kittens.
But it took three years of searching to find three white cats without a single black hair. The three cats loved their young mistress and she adored them.
As the months turned into years, the linen balls continued to be the only toys the cats chose to play with. The gold balls lay dusty and forgotten.
When the Princess was old enough to spin the cats were as happy as she was. They leaped at the wheel as it turned and at the thread as the princess spun it.
She begged them to stop, but they wouldn’t.
At 16, the Princess was very beautiful and princes came to see her from all over the land. But she was happy to live with her cats,
One day, however, a prince arrived who was good and charming, wise and handsome, and the princess fell deeply in love with him.
The three white cats were in the tower room playing with the linen balls, but no sooner had the Prince and Princess professed their love for each other, they noticed the gold balls for the first time ever and began to play with them.
But it wasn’t the princess who became ill, but the Prince.
Desperate, the Princess sought out the old witch, who said there was only one thing she could do: spin ten thousand skeins of pure white linen thread before midwinter’s day.
It was an impossible task as only 27 days remained before midwinter’s day. No hand but hers could spin the thread or the Prince would die.
The Princess worked non-stop, but she knew she had no chance and burst into tears.
Her three cats sat by her feet to comfort and console her.
“If you only knew what was wrong I know you’d help me if you could,” she said to the three silent white cats at her feet.
To her amazement, one of the three placed its front paws on her knee, stared into the princess’s face, opened its mouth and said: “We know what is needed and we know how to help you.
“Cats have no hands, only paws, so we can do the spinning for you and it will not break the terms of the prophecy. Now we must get to work for there is little time left.”
The cats span rapidly and beautifully, and the skeins increased in number. Each time one was finished, the Prince’s health improved and on midwinter’s eve ten thousand skeins were ready.
The old witch was amazed and told the Princess to be sure and show her gratitude to her faithful cats.
The Princess loved her cats and gave them all her glittering jewels, which they loved to play with.
On her wedding day, they sat in places of honour on magnificent velvet cushions, each with a necklace of precious stones around its neck.
As the feast continued, the three cats curled up contentedly on their cushions and fell asleep.
From all three came loud, contented purring. This was the reward the cats had received for their work.
Though no cat would ever again speak, all cats would purr like the whirr and hum of a spinning wheel…

I will not be moved

His purr might not quite be Smokey-ing, but Archie has some powerful decibels

We all know that Archie is just purr-fect, but a Tweet last week got us thinking: ‘Just how loud is his purr?’ END_OF_DOCUMENT_TOKEN_TO_BE_REPLACED

Photos say it all 🙂 END_OF_DOCUMENT_TOKEN_TO_BE_REPLACED

Sun is shining cats will make the most of that much needed sleep. END_OF_DOCUMENT_TOKEN_TO_BE_REPLACED

A not-so-crazy couple with 15 cats

trying to get faster even as I get older

~ Art, cats, nature, animals, weather, and whatever. Painter at heart ~

The Life of Service Cats

Passion is a five letter word : Heart - by Cat Forsley