Archie and his cystitis

Regular readers of this blog will know that Archie has been ill the last few days.
It’s not a new problem, but a constantly returning one for the old boy.
Archie has feline cystitis, a rather nasty condition that sends him constantly scurrying for the litter tray or into the flower beds.
He’s had it for about three years now and, because of a couple of operations (a description of which would make any man’s eyes water) he can’t do himself any permanent damage.
But he does have to put up with a lot of pain and cat litter bills tend to go through the roof once every six months or so! 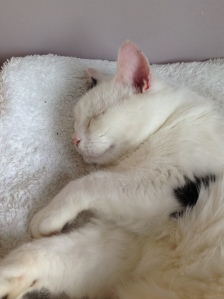 Cystitis is a condition where tiny crystals or sand like particles form within a cats urine.
The crystals stage can be treated, but can also be directly translated to a cat’s bladder leading it to become inflamed.
When it gets really bad it can lead to the cat’s urinary tract becoming blocked and eventually even to the cat dying.
Stagnant urine build’s up in the animal’s body and this can harm the kidneys, even causing kidney failure.
Fortunately, Archie never reached that stage but a few years ago he was very ill. His bladder had become infected and, despite other treatments, the crystals kept causing him problems.
That meant he had to undergo two major operations – the first didn’t work, but the second was a success.
Basically it meant that the part of Archie (look away now men!) that had been blocking the crystals from escaping was removed.
Thai lady-boys pay thousands for the same treatment…
Although the ‘blockage’ was removed, Archie still forms crystals in his urine from time to time and this still causes all the basic symptoms of cystitis.
These consist of problems such as:

Archie has done all of these things while he’s had cystitis, and most of them in the last two or three days.
The good news is that with the right treatment he’ll be better in a day or two.
Over the years we’ve researched or been told lots of reasons why Archie may have got cystitis or how to cope with it, but the general consensus is that no-one really knows.
Stress is one theory; although how a beast that spends his days asleep on bed, sofa or lap and bullying his Mum into seconds at dinner time can be stressed is beyond us!
These days it is more likely he is simply picking up the infection as a result of the changes to his body from the previous operations.
Whatever the case he’s not a happy catty at the moment, but the good news is its the weekend so he’s back on Mum’s knee and feeling more comfortable already…

Posted on 23/06/2012, in Uncategorized and tagged Archie, Cats, cystitis. Bookmark the permalink. 9 Comments.

Daily adventures of living with a bunch of cats

a running explorer of this planet

The Lives and Training of Service Cats